Change the location in the form for different locations in Turkey including Bodrum, Dalaman and Istanbul.

Most car rental companies in Turkey do not accept American Express cards.

Are you looking for somewhere a little different for your holiday this year?

Turkey is a cultural amalgam of East and the West, and situated at the south-eastern border of Europe, Turkey is geographically in both Europe and Asia. The River Bosphorous which runs through Istanbul divides the two continents. 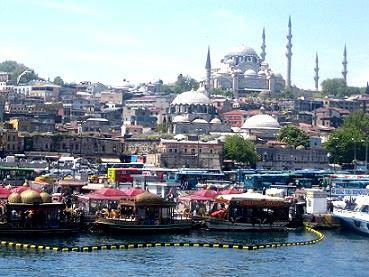 Turkey has absorbed the cultures of both continents, and yet managed to retain a unique identity of its own. Bordering countries as diverse as Armenia, Bulgaria, Georgia, Greece, Iran, Iraq and Syria, there is a huge variation in culture from east to west.

If you are looking for value for money, Turkey is currently outside the Euro-zone, and is very reasonably priced compared to many Mediterranean locations, although prices have increased over the last few years. The flight prices from northern Europe to Turkey are likely to be the major cost of the holiday due to the long flight distance.

Istanbul is also becoming a popular short-break destination, with historic attractions such as the Blue Mosque and the Grand Bazaar helping to attract nearly 33 million tourists to Turkey in 2011, and making Turkey the 6th most popular tourist location in the world.

Warm beaches, winter sports, historic architecture, luxury cruises, boat rides down the Bosphorus, Turkey offers you all this and much more. For food enthusiasts, Ottoman cuisine is considered to be among the finest in the world. If shopping is more your cup of tea, the Turkish markets are full of bargains and crafts. For those who would rather do nothing more than sit back and relax, then the many resorts which dot the coastline are the best places to visit.

Many of the package holiday operators focus on the warm southern coast of Turkey with some of the best beaches located in Antalya, Dalyan, Fethiye and Marmaris. Many of the beaches in Turkey are hidden away from the main tourist resorts, so a rental car is recommended.

For more information on beaches in Turkey, see the Guardian beach guide 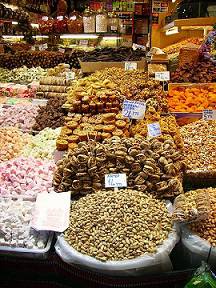 Turkish markets offer a chance to see local Turkish produce, and by-pass the larger retail outlets. Everything from fresh bread, fruit and vegetables, meat and fish, locally made clothes, bags, jewellery, artwork and antiques are found in most Turkish markets.

Be prepared to "haggle" to get the best prices throughout Turkey.

The famous Istanbul Spice Market teases the senses with the vast array of herbs and spices on sale.

The hammams in Turkey (Turkish baths) are an unusual experience. The Turkish baths are a combination of hot rooms, saunas and massage.

Prices in Turkey are similar to the UK for many items. 1 UK pound is equivalent to around 4.5 Turkish Lira. Cigarettes are significantly cheaper in Turkey at around £ 10 for a pack of 20, and clothing is generally more expensive. If you are offered cigarettes at lower prices they may be fakes. More Turkish prices

The speed limits on Turkish roads are:-

Use of Seat Belts

The use of seat belts is compulsory for front and back seats in all cars driven in Turkey, except for those manufactured after 1995 (which shouldn't include your rental car!) It is evident when driving in Turkey that the seat belt law is ignored by many people.

Alcohol Limits in Turkey for Drivers

In Turkey the blood/alcohol limit for driving is 0.5 mg per ml, which is lower than in the UK.

In Turkey the minimum age at which you can drive a car is 18.

However, if you are planning to hire a rental car, check the minimum rental age, as drivers usually must be 21 or older.

How to get to Turkey

Flights from the UK to Turkey take around 4 hours, which may be a consideration for families with young children.

Some of the low cost airlines including Easyjet and Monarch (but not Ryanair) now fly regular routes to Turkey.

There are international airports at Istanbul, Antalya, Bodrum, Dalaman and Izmir.

Some of the most beautiful coastal scenery in Turkey is located around Marmaris, the closest airport to Marmaris being Dalaman.