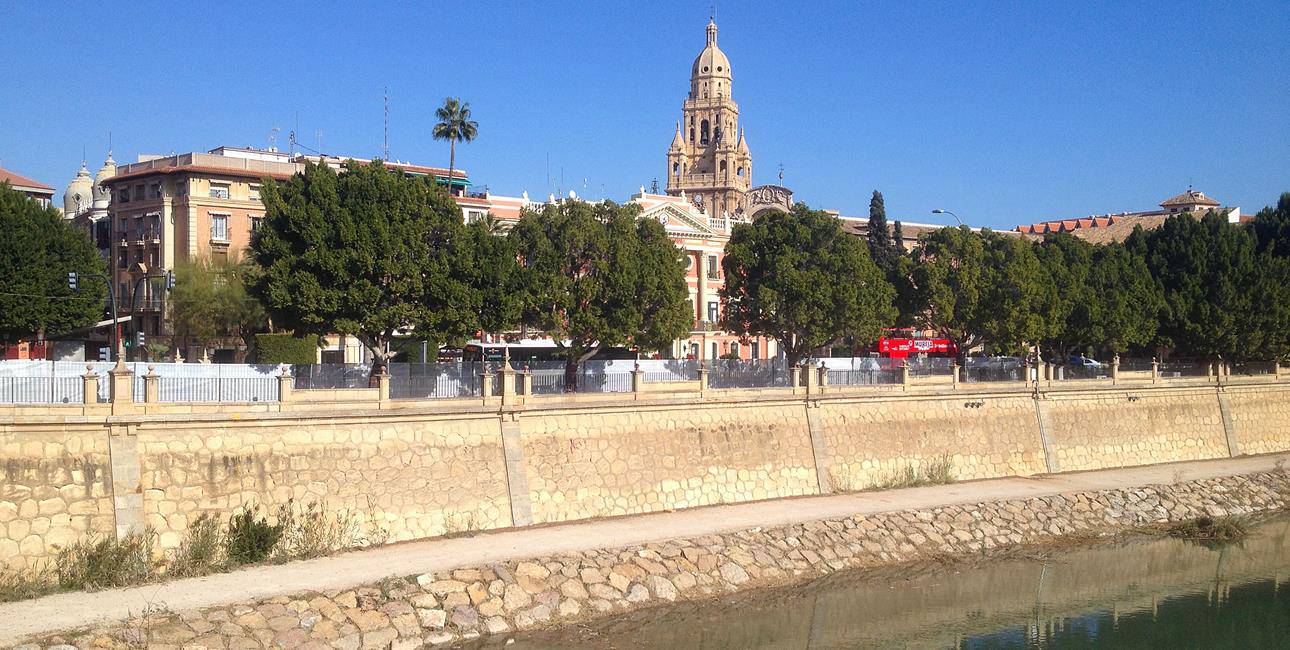 The city of Murcia in south eastern Spain is not renowned as a tourist destination, but the university city captures the essence of south eastern Spanish culture. The religious heritage of Murcia is reflected in the fine architectural work of many of the city’s buildings. 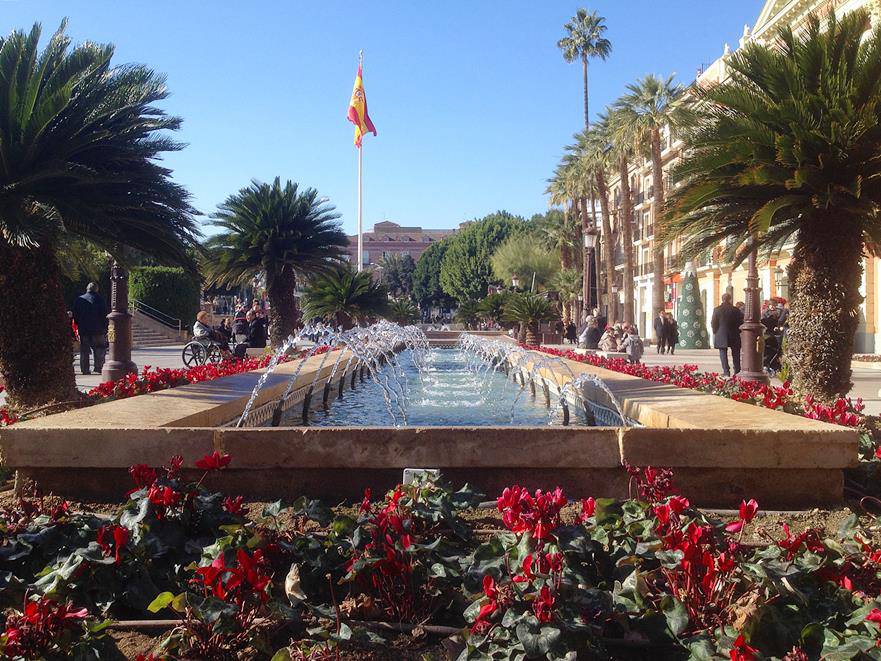 Murcia (pronounced "Moorthia" locally) is a typical Spanish working city with a large student population. The city is not a coastal resort which may suprise people who associate the name Murcia with beach holidays. However, the city has plenty to offer travellers looking for a taste of authentic Spain. Set in a region renowned for its agricultural produce with origins dating back to the Moorish period, Murcia is under 1 hour's drive from the popular Costa Calida resorts.

Murcia is usually bathed in warm Spanish sun but can feel oppressively hot in July and August - even in winter the days are usually warm enough to eat outside in the middle of the day. Having a large student population, Murcia has a lively and vibrant ambience, with nightlife continuing through the night on Fridays and Saturdays.

If you only have a few hours to spare in the city, the best option is to head for the Ayuntamiento (City Hall) where there is a large public underground car park. From the car park, the Cathedral and some spectacular river views are within 5 minutes walk.

The Ayuntamiento de Murcia (city hall) is set on the banks of the Rio Segura. Locals and tourists gather to capture the splendour of this impressive building which is surrounded by colourful beds of Spanish flowers. At weekends Spanish weddings are held here so the front of the building is often surrounded by well-dressed guests showering the newly-weds with dried rice. The sub-tropical gardens and water features at the front of the building offer some of the best photo opportunities the city has to offer.

There is a small Christmas market at the front of the building in December, where you can find local arts and crafts.

Terraz Tornasol offers reasonably priced food (pizzas from €5) at the front of the building, allowing visitors to eat outside and admire the architecture and gardens. 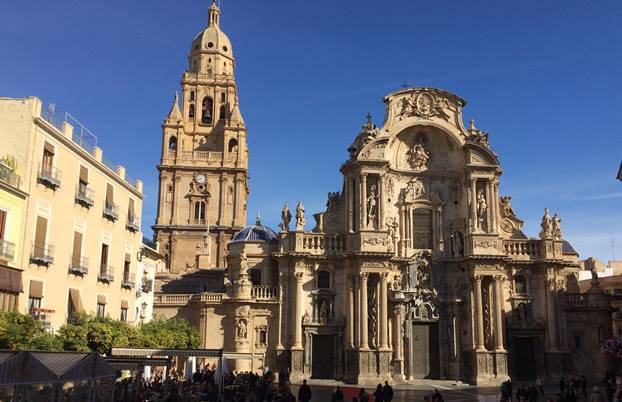 The centrepiece of the city is the stunning cathedral (La Santa Iglesia Catedral de Santa Maria), which has its origins in the 14th century, but was added to up until the 18th century. Some of the best views of the cathedral are captured from the banks of the Rio Segura which is a short distance from the cathedral. In the height of summer, the Cathedral tower is open some nights for visits for spectacular views of the city.

Opening times for the cathedral and on-site museum can be found on the Murcia Cathedral website.

The Salzillo Museum is Murcia’s homage to the local 16th century sculptor Francisco Salzillo. His work focused on religious imagery which is brought to life during the modern day Holy Week processions. The Archaeology Museum (Museo Arqueologico de Murcia) has an impressive array of local treasures excavated from sites dating to Paleolithic and Roman times. The small Santa Clara Monastery and Museum in Murcia city centre is home to antiques dating from Moorish to Christian times. Allow a couple of hours to see everything.

Plaza de las Flores and the adjoining Plaza Santa Catarina are home to Murcia's best selection of tapas bars and traditional Spanish restaurants, many of which attract the finest chefs.

This area is where the local Murcians congregate at weekends and holidays to indulge in marathon eating sessions, which may last for several hours as tapas is often served one dish at a time. Most of the wine served comes from Jumilla in the North of the region. 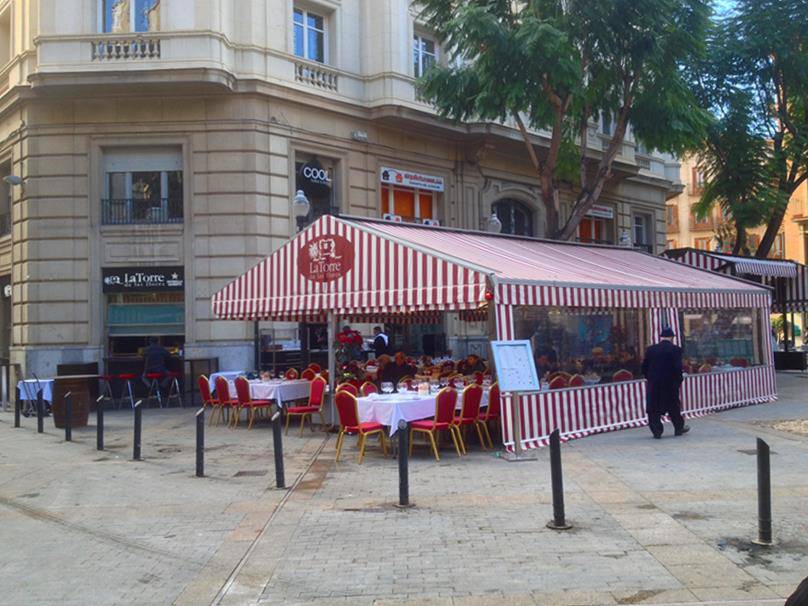 One of the most popular restaurants is La Torre De Las Flores, which is located in Plaza Santa Catarina. Due to the restaurants popularity you may have to book or be prepared to queue for a table. Around the corner in Plaza de las Flores there are plenty more slightly less popular tapas bars, with outside seating throughout the year.

Murcia mainly caters for Spanish clientele, so this generally means that you will get excellent value for money and high-quality food. However, orders may get lost in translation as menus are often only in Spanish, and many staff don't speak English,

The Murcia region is renowned for its pork dishes - Jamon Serrano is ham cured over several years in salt. It is served at most Murcian restaurants. It is cut so thin you can see the light through it. Almost all the fat is lost in the process of curing which makes it a really healthy form of meat. Carving it is a special art, which requires training. The highest quality Jamon Serrano is produced from pigs that are fed on a diet consisting solely of acorns.

Other local dishes of the area include rice dishes similar to paella, grilled vegetables and an exquisite range of salads. There are many Murcian specialties such as Habas con Jamon (a bean stew with ham), ensalada murciana (a salad of tomatoes, egg, onion, black olives and bacalao or tinned tuna), zarangollo (a medley of Murcian vegetables with or without scrambled egg).

With its proximity to the Costa Calida coast, Murcia has a good range of seafood dishes. A traditional recipe from Cabo de Palos is caldero. This is rice that has absorbed all the stock from a medley of fish of the type that hang about the rocks, red mullet, scorpionfish, etc. It is made spicy with nora (sun-dried bell peppers) and served with allioli. Some restaurants offer a little plate of the fish that made the stock to be enjoyed alongside the rice. It is traditionally a lunchtime, rather than an evening dish.

The concept of vegeterianism isn't entirely comprehended in much of Spain, however the Murcia region grows an impressive range of ingredients for vegetarian food including rice, almonds, olives and many kinds of fruit and vegetables. If you are vegetarian be sure to check that your food is "sin carne" (without meat) and "sin pescado" (without fish). Local dishes for vegetarians include vegetable paellas, croquettes made with goat cheese or boletus mushrooms, cured cheese (queso curado) and of course tortillas. Patatas bravas is always a safe bet for vegetarians in any tapas bar. 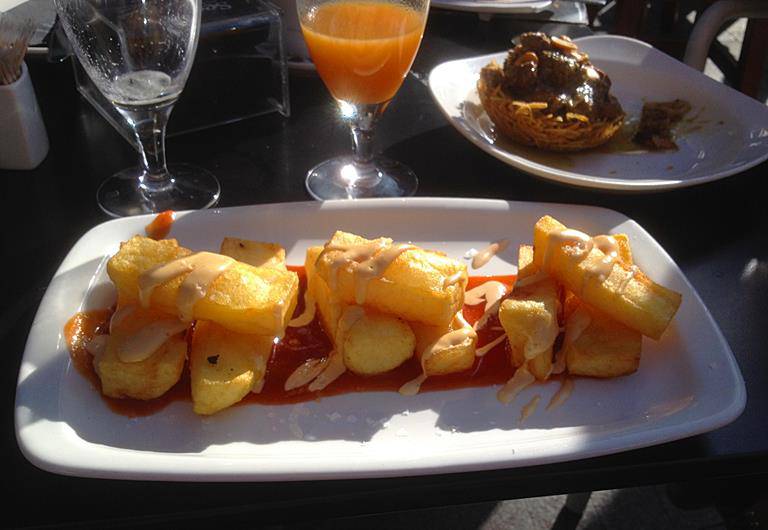 On the north-east side of town the Terra Natura Park offers a good alternative day out for families with a water park and zoo on the same site. The warm Murcian climate is ideal for many African animal species including lions, rhinos, hippos, giraffes and meerkats. Nightime safaris are also available in the summer months. Daytime entry costs around € 25 for adults and € 20 for children, safaris are cheaper and include food. Check the Terra Natura website for more details.

Murcia is one of the hottest places in Spain during the summer months, so is best avoided during July and August unless you enjoy intense heat with daytime maximums typically reaching a sizzling 35-40 degrees. Winter is a good time to visit when daytime temperatures generally reach 14-19 degrees maximum although nights can be chilly.

Murcia is located around half an hour’s drive from Corvera Airport and an hour from Alicante Airport.