The volcanic island of Lanzarote is one of the few places in this world which has a landscape which resembles the moon.

Volcanic eruptions have made the centre of this island into a stark region, where more shades of brown, red, black and green appear than anywhere else in world. 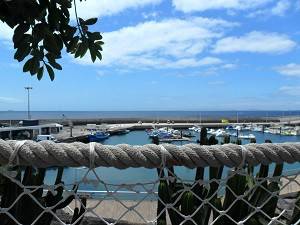 At first glance, Lanzarote seems a barren dead island - but a closer look reveals areas teeming with life, from the skittering geckos to the many species of wild birds including hoopoes, rare vultures, Eleonora falcons and even the protected species, Houbara bustards.

There are over 300 beaches in Lanzarote, with everything from the black sands of El Golfo, the grey sands of Puerto del Carmen, the golden stretches at Costa Teguise, and the white sands of the Papagayo coves and Famara.

It takes just one hour to drive from tip to tip on this Island, making it a great location to explore by car. Driving is a pleasure in Lanzarote, as the roads are well maintained in most areas, and clearly marked for navigation. It is considered best practice to stop at traffic lights to allow pedestrians to cross, whether the lights are red or not. Look out on roundabouts, as the common method is to stay in the outside lane all the way round, regardless of which exit a person is taking. Do also take care if you are coming from Britain or Ireland, not to drift towards the centre of the road.

There are 5 main towns or resorts here, surrounded by dozens of smaller towns and villages. Arrecife, Costa Teguise, Playa Blanca, Puerto Calero and Puerto del Carmen. However, for the traveller that prefers to get off the beaten track, there are some fabulous rural rental properties inland, as well as at the fabulous Famara Beach, and the world class sport training centre, La Santa.

The largest town in this island has restaurants and cafes, rows of shops, and is very much a working city. It is here that you will find the only airport on the Island, which is located just outside the capital itself.

Tip: Park underneath the tallest building on the Island, the Gran Hotel, Arrecife. Head up to the cafe and enjoy views across the island

Costa Teguise is the first purpose-built resort on the Island and has firm fans that return year after year to enjoy the varied restaurants available, as well as the beautiful beaches. Costa Teguise enjoys a breeze all year round, which has stamped it as a popular destination for windsurfers

Lanzarote's most southerly resort enjoys its own microclimate, giving it fabulous weather for much of the year. The town still enjoys a Spanish feel, but has a variety of resataurants and bars of all types for everybody's tastes. More popular with families and couples, this resort is quiet and calm, although there is always a party somewhere if you want one. Head to the Marina Rubicon on Wednesdays or Saturdays for a great atmosphere, and enjoy a bite to eat at one of the many excellent eateries in that area.

This small resort is focussed around a luxury Marina, and 2 top class hotels, although there are also a number of private villas for rent too. Just a 10 minute drive from the busier Puerto del Carmen, the village also provides a number of designer outlets for those that enjoy clothes shopping

This is the largest and busiest resort in Lanzarote. British and Irish bars abound here, and these flank a long sandy beach. The Old Town is where you should head to for seafood restaurants, whilst Matagorda at the other end of the resort is great for families and a good old "knees up". "The Strip", as the main street is called, is where the parties happen. Head to Centro Atlantico after midnight and you can dance until dawn. This resort is particularly popular with families and larger groups.

The cuisine is predominantly Canarian and Spanish in Lanzarote, although British and Irish fayre is easily found in Puerto del Carmen, Playa Blanca and Costa Teguise.

Enjoy the local treats such as papas arrugadas con mojo. These are small wrinkled salty boiled potatoes, served with a green and a red spicy sauce - goes great with fish! Enjoy a glass of arehucas con cola - a dark rum, very popular on the island. Have a sweet tooth? Then you must try ron miel, a honey rum local to the Canaries... very sticky and very very sweet... great over ice!

There is also a good representation of Italian, Chinese, and Indian restaurants in all the larger towns. In the villages, opt for such homemade tasty meals as estofado (beef stew), conejo (rabbit) or cabrito (kid goat). Food in the villages is hearty and laced with onion and garlic. It is also a great deal cheaper than in the major towns.

Tip: Take a look at Canary Nightlife before you travel for ideas on places to eat, drink and party.

Places to Visit in Lanzarote 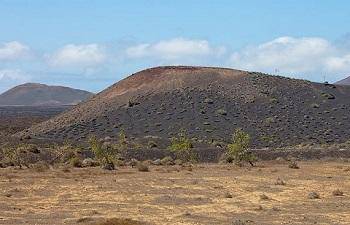 This is the best example of the volcanic landscape which is the trademark of Lanzarote. Since the eruptions of the 1730s this landscape has not changed very much, and within this park are located the Montanas Del Fuego (Mountains of Fire). Look for the imp symbols, found through this area. If hiring a car in Lanzarote, you can head to Timanfaya at a vastly reduced rate in comparison to coach tours, and park at the Visitor's Centre, which is reminiscent of Thunderbirds. From here, a coach will take you on a tour of the mountains, with recorded audio to explain more about this breathtaking area. See TripAdvisor reviews of Timanfaya National Park

Held every Sunday, this market boasts an array of stalls, selling tourist gifts and local handicrafts.

Proudly known as Lanzarote's "favourite son", Cesar's influence can be seen all over the island, as it was his influence that banned high rise building on the Island. His former home is now a museum, and is located just off the roundabout at Tahiche. Step back in time to when James Bond's "Dr No" was in full swing, and admire the beauty and simplicity that Cesar put into all his work, whilst embracing the landscape and respecting nature.

These two attractions can easily be visited in the same day. Head below the earth's surface and see how Cesar Manrique has utilised the earth's natural shape to provide a natural auditorium. Look also for the albino crabs in the rock pools below.

Feeling a bit Raquel Welch? Then don your furry bikini and go frolic in the waves at El Golfo. Here you will also find a natural green lagoon (not for swimming in), as well as a nearby village containing plenty of great seafood restaurants.

Not to be missed

Carnival If you can time your visit for Carnival time in the spring, the towns all host their own events. The Spanish love to party, and it is at carnival time that this is most apparent.

The water sports at the beaches. After all, the beaches are the greatest attraction at this island, and water sports are an inevitable part of them. Diving is especially popular, and there are many Dive Schools on the Island, waiting to accompany you to the beauty under the sea.

Lanzarote enjoys perpetual spring or summer. The temperatures can range from maximums of 18-22 C in winter to 30 C in summer. These temperatures make these islands a year round destination, but if you were to choose the best months, then they would be the months from December to March, when everyone is looking to escape the cold of Europe and the UK. Rain is rare in Lanzarote, but when it comes it comes. Generally this is around the middle of February and October.

The only airport in Lanzarote is located at Arrecife, and is fairly small when compared to other larger airports at the Canary Islands. This airport caters mainly to flights from the Spanish mainland and from charter groups from Europe. It does have good connectivity with the rest of the Canary Islands.

Both Arrecife and Playa Blanca have harbours for commercial ferries, although the two marinas at Playa Blanca and Puerto Calero welcome yachts from all over the world.

The volcanic landscape of Lanzarote featured in the Stone Roses 1989 "Fools Gold" video, and in a number of "Sc-Fi" films made in the 1960's and 1970's, including "One Million Years BC", "When Dinosaurs Ruled the Earth" and "Journey to the Centre of the Earth".