Search and compare quotes from all the leading car hire companies at Murcia International Airport in Corvera.

Murcia International Airport (RMU) also known as Murcia Corvera Airport replaced Murcia San Javier Airport on January 15th 2019 for all passenger flights into the Murcia region. Murcia International is located 25km to the south of Murcia city centre and is the closest airport to the Costa Calida and the southern Costa Blanca holiday regions.

Many people prefer to collect and return their rental vehicles at the airport which is easy at Murcia due to the small size of the airport. Companies providing onsite car rental at Murcia International are:

Europcar, Firefly, Goldcar (and affiliates InterRent) and Sixt have offices outside the terminal building opposite the Arrivals Hall. The rental vehicles for the above companies are collected and returned to the car parking area behind the offices.

Several rental companies at Murcia including Centauro and OK Rent a Car operate a shuttle bus service to their local offices.

The following table summarises which car rental companies are based on site at Murcia International Airport or offer a shuttle bus service to local premises:-

The standard car rental deals include CDW insurance with an excess in the event of vehicle damage or theft. The rental companies offer additional zero excess insurance products which can be purchased when signing the rental contract.

The companies we work with at Murcia require a valid credit card to be presented when the car is collected. 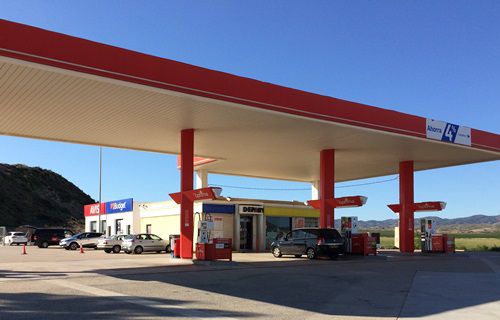 There is no fuel station at Murcia International - the closest is the CEPSA garage on the A-30 just off Junction 161 (Pk 413.9, A-30, 30155 Murcia) which is ideal if you are approaching the airport from Murcia, Cartagena or one of the Mar Menor resorts (approaching from the Mar Menor there are several fuel stations on the RM-19). The CEPSA garage is 5-minute drive from the airport. If you are driving to the airport from the Camposol/Mazarron direction this is still probably the best option.

Alternatively, there is a REPSOL fuel station in Corvera (Ctra. Fuente Álamo, 30153 Corvera, Murcia) and several in Fuente Alamo.

Most of the rental companies require vehicles to be returned with a full tank of fuel to prevent an Administration Charge. This can range from €25-50 depending on the amount of missing fuel.

Murcia International Airport (Aeropuerto Internacional Region de Murcia) is a single-terminal building on 2 levels with Arrivals and a Departures Hall on the Ground Floor (Floor 0) and Passport Control, Duty-Free Shopping and Boarding on the First Floor (Floor 1).

The Arrivals and Check-In desks are on the Ground floor (Floor 0). As you enter the Arrivals area there is a Tourist Information desk run by murciaturistica.es.

There is also a small Costa Coffee with airport prices (a coffee and croissant costs around €4) and a WHSmith.

In the Check-In area Ryanair, Easyjet and Jet2.com have offices should you need to buy or amend tickets offline. There is a Police desk and an Airport Information Desk.

Passport Control, Security Checks, Boarding Gates and the Departures Lounge are on the Floor 1. There are 2 restaurants on Floor 1 - a second Costa Coffee and a large Subway. Duty Free shopping is limited to a single duty-free outlet Buy Bye (run by the Dufry chain), a second WHSmiths and several vending machines.

Free Wi-Fi is provided by AENA throughout the airport building.

There are 4 bus routes run by Interbus from a small bus terminal 2-minutes’ walk from Arrivals:-

The Interbus service operates from the bus terminal outside Arrivals (exit the terminal building and head to the right past the taxi rank). Tickets can be purchased online or at the airport. The Latbus company runs a service (Linea 72) between Murcia and Corvera town.

A fixed-price taxi rate of €29 applies between Corvera Airport and Murcia city centre. This table gives a guide to taxi prices from Murcia International Airport to popular locations around the region.

These prices are for taxis licenced to operate from the airport, private companies may quote cheaper prices.

There is no train service at Corvera Airport. From Murcia city centre there is a regular train service to Madrid (approx. 4 hours) and Valencia (approx. 3½ hours).

The following table gives road distances, drive times and suggested routes from Murcia International Airport to popular destinations in and around the Murcia region:

Which Airlines Fly to Murcia?

Many flights to Corvera Airport are seasonal (March/April to October) with a limited Winter service operated by Binter Canarias, Easyjet, Ryanair and TUI. For an up to date list of flights visit flightradar24.com.

There is no rental accommodation within several kilometres of Murcia International, so for most people a rental car or taxi to Murcia (city) or the Mar Menor resorts are the easiest options.

On the north side of Murcia there are a several chain hotels including a Marriot, Ibis and Campanile which are a short bus or tram journey from the city centre. The Hotel Venta El Puerto is closer to the airport located a couple of km outside Corvera on the A-30 en route to Murcia city. However, most people will prefer to head directly to their resorts or accommodation as there isn't much to see apart from desert and citrus groves close to the airport.

If you want to stay close to the airport the Corvera Golf and Country Club is a large resort complex which is only a 10-minute drive from the airport. The resort is very quiet with many empty, unsold properties and strangely does not have a golf course! Private rental properties on the resort are available (via Airbnb, booking.com, etc.), and with full-time security and several pools, for some people may be a good choice for a quiet weekend away in the sun close to the airport.

Slightly further afield the La Torre Golf Resort and Spa offers 5-star accommodation or for a budget hotel Venta El Puerto Restaurant is less than 15 minutes’ drive from the airport.

When the tourist money came rolling into Spain before the recession hit back in 2008, large numbers of construction projects in both the private and public sectors were financed by the banks eager to cash in on foreign investment.

Much of the investment in Spain was financed privately as speculators anticipated an endless stream of euro-tourists and property investors flooding into the country. Then in 2008 the recession hit Spain, leaving the Spanish banks saddled with huge debts and toxic assets as newly built tourist houses and developments lay half-finished or empty, loans went unpaid, and investment and construction companies went to the wall. One of these half-finished projects was Murcia's new airport at Corvera.

Construction work at Corvera commenced in back in 2008. The new airport was heralded as the gateway to another of the regions "manana" projects, the Paramount Theme Park which was expected to attract millions of European tourists to Murcia. However, the financial downturn in Spain left the Paramount Theme Park, Corvera Airport and a host of other development projects in a holding pattern.

The process for closing Murcia's existing airport at San Javier and transferring passenger flights to Corvera has not been straight-forward. There were many opponents to the scheme, including foreign residents who live close to San Javier and local airport workers. After years of legal wrangling the bid to operate Corvera Airport was won in 2017 by AENA who operate most of Spain's passenger airports.

Why move from San Javier to Corvera?

There were several factors influencing the decision to build Corvera Airport. Firstly, San Javier airport is a small airport which doubles as a military airport. Facilities are often overstretched during the busy summer months when passenger numbers are at their peak (this problem has been partially resolved following some major refurbishment at San Javier Airport).

The second factor was the planning of a new theme park licenced by Paramount which was due to start construction in 2013. It was envisaged that Murcia San Javier airport would not be able to handle the huge number of additional tourists which the theme park would attract, so in part the new airport was supposed to service the new influx of visitors to the region.

Additionally, Alicante Airport often runs at full-capacity in summer, and it makes sense for passengers heading to Murcia and the Costa Calida to fly further south to minimise airport transfers.

The Murcian authorities are hoping that Corvera Airport will eventually bring more tourists to the Murcia region giving a much-needed cash injection to the economy.