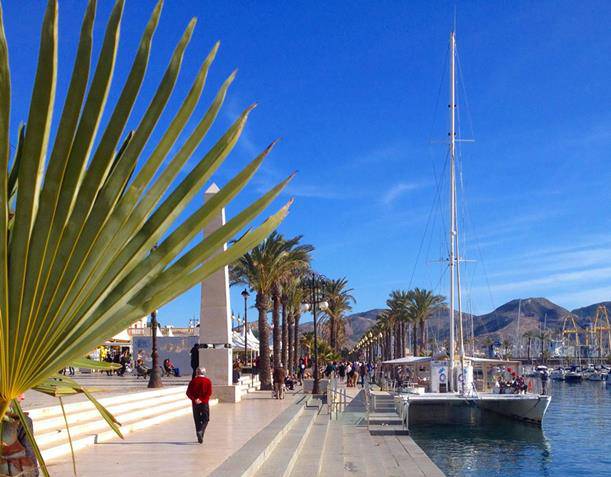 Cartagena is historic Spanish city, which is gaining popularity as a tourist destination, thanks in part to the huge cruise liners bringing hundreds of thousands of visitors to its port every year.

English is only spoken in tourist offices, museums and the restaurants and shops along the front and in Calle Mayor. Further into the city you will have to "go native".

Cartagena is not a seaside holiday spot, although it has some good beaches away from the city centre. Most people visit the city to spend a few hours looking at the historic sites and enjoying gourmet food or concerts.

There are two important music festivals bringing international stars to Cartagena, the Mar de Musicas in July and the Jazz Festival in November.

Cartagena also has the festival of Carthaginians and Romans in September which celebrates the city's early history with a variety of pageants. There is a tapas route in Spring and a gastronomic fair. Throughout the year good tapas is available. The fish is particularly good as the city still has a large fishing fleet and market in the Santa Lucia district. Tradition says this is the area where St. James first landed in Spain. 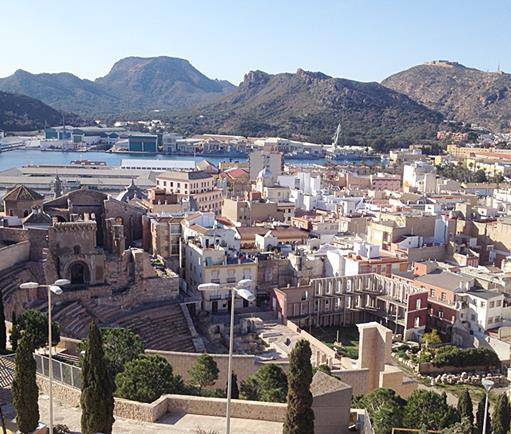 The number 1 tourist destination in Cartagena is the Roman Theatre built in around 5 to 1 BC. The theatre has been well-restored and was used in Alex de la Iglesia's film, "La Chispa de la Vida" starring Salma Hayek. The theatre was used for plays in Roman times. Entry costs €6 for adults.

Just above the Roman theatre is a second amphitheatre which was excavated under the former bullring. Excavation work is still in progress.

Close to the area where cruise ships dock there is ARQUA, Spain's first museum dedicated solely to marine archaeology. This now houses the Treasure of the Mercedes, thousands and thousands of silver coins.

Other museums include the Barrio Foro Romano, a covered section of old Roman streets, a gym and bath houses, a good way to imagine everyday life nearly two thousand years ago and the Casa de la Fortuna (House of Fortune), the Decumano and the Augusteum.

Close to El Corte Ingles there is another archaeology museum founded on top of a Roman cemetery which is visible in the centre of it. Cartagena has been an important city in military terms and contains military and naval museums, a Civil War museum and a host of fortifications in the hills around.

Cartagena does not live by tourism alone which means it is lively at times of the year when many of the coastal towns are dead. One of its main industries is making submarines. Sometimes you are lucky enough to spot one crossing the port. The modern submarine was invented here by Isaac Peral. The original one can be seen housed in the Naval Museum on the front. Navantia, the shipyard which makes submarines also repairs luxury yachts from around the world.

Apart from its museums, Cartagena has some impressive architecture. There are many graceful Art Nouveau properties. These were palaces built with mining money and are mostly now owned by banks. Several of these, like the Casino, are sited in Calle Mayor which is pedestrianised. Many tourists stroll along this route. There are also impressive buildings from the Eighteenth century, a military hospital and an old training area for the navy which have been converted and are being used by the University Polytechnic.

In Calle Mayor and the roads that lead from it there are menus del dia (Menus of the day) on weekdays starting from € 10 and rising to 20 for gourmet versions. A la Carte meals in the better restaurants cost a little more.

The Barrio de San Roque does one of the best higher priced "menus del dia". It is in Calle Jaboneras, one of the two roads that run towards Plaza Espana from the top of Calle Mayor. La Patacha in the port is also a pleasant venue and currently does a "menu del dia" for € 10. It is a converted boat. 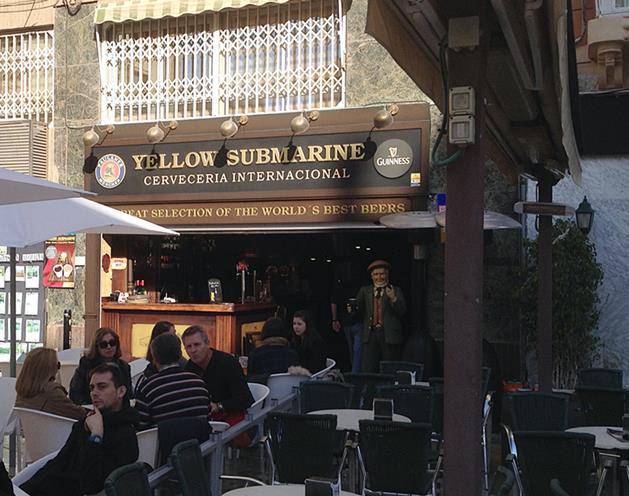 If you are a lover of fish you will enjoy the Santa Lucia district, which also has a glass museum which is only open at the end of the week. Techos Bajos on the edge of this district has a good fish-based "menu del dia" for € 9. Other restaurants include Casa del Pescador and El Varadero. The best deal can be had in the Marisqueria La Marina, € 15 to eat all you want with a drink and a coffee or dessert thrown in. This is only for the most dedicated fish lovers as it contains a lot of octopus, squid and shellfish. They really do keep the plates coming for as long as you can eat. Wonderful value if this is your kind of food. Just don't expect cod and chips.

Beer aficionados should take time to visit the Yellow Submarine Cerveza Bar (also in Plaza Ayuntamento) which has a wide range of beers from around the world and does reasonable food including paellas.

Cartagena's best beach is Cala Cortina. While it is not sandy, mainly shingle and pebbles, it is extremely popular thanks to its abundance of sea life in the rocky reefs along its side. It is a perfect place to snorkel or dive. It also has the Mares Bravas restaurant which does a menu on weekdays for € 10. At the weekends it is popular for paellas. You would need to order these beforehand, or at the least, wait until it is cooked. Most of the waiters there speak some English.

Located above the city centre is Parque Alfonso Torres, which contains the Castillo de la Concepcion and has breath-taking panoramic views including the Roman Theatre and port and the nearby mountains. There is also a fountain with ducks and many peacocks roaming freely in the park.

Although entry to the park is free, there is a glass lift (Ascensor) to the top which is charged at € 2 for adults and €1 for children. It is also possible to walk (a rather winding route) to the top from next to the Ascensor if you don't want to pay.

Getting Around in Cartagena

Cartagena has transport connections to many other parts of Spain via large bus and train stations. The smaller FEVE station operates an hourly train to Los Nietos. It passes through mining country where many interesting ruins of industrial architecture can be seen from the train. 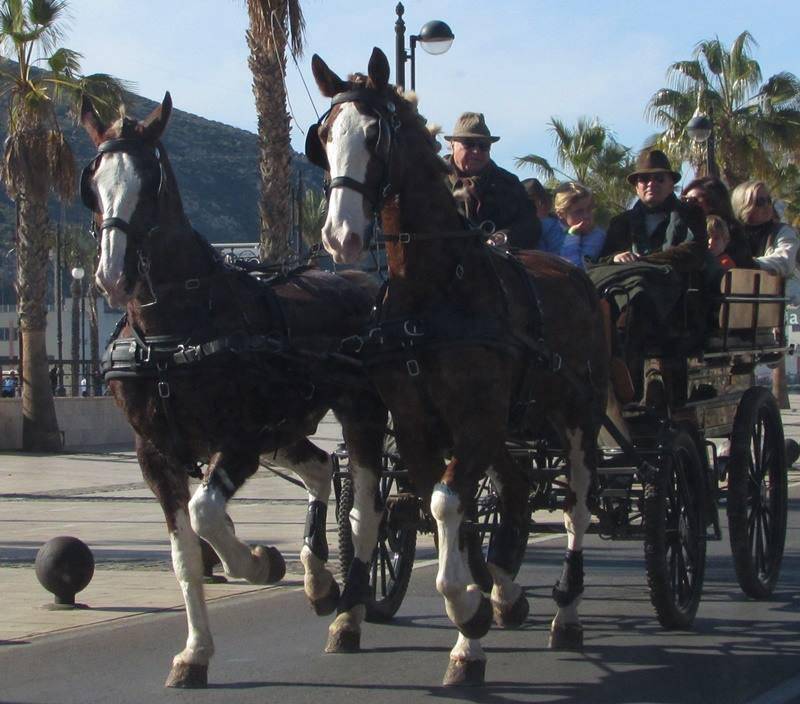 You can explore Cartagena from a horse drawn carriage on the cities bustling promenade. The city centre is condensed into a small area, so the most popular way to see the sights of Cartagena is on foot or by bicycle.

The climate is pleasant all year round and never drops below zero. In August the temperature can rise to 40 degrees, although it is usually slightly less by the sea. August is probably not the best time to visit unless you are a dedicated heat lover. It's a time also when many businesses close for an annual break.

Cartagena is located half an hour’s drive from Murcia International Airport and just over an hour from Alicante Airport.

By car, the AP-7 autopista (motorway) connects Cartagena to Alicante to the north and Almeria to the south, but beware some of the road signs out of the city are rather confusing (follow Alicante AP7 signs for Almeria until the road splits).

There is plenty of city centre parking available around the Paseo Alfonso X11 road and in underground parking near the military barracks.