Blue Valley Car Hire provide car hire quotes at Almeria Airport and at other resorts in the Costa Almeria.

Most of the rental companies at Almeria do not accept American Express cards.

Located in the south-eastern corner of Spain, Almeria Airport (LEI) is situated 9km to the east of the city of Almeria.

Almeria Airport is much smaller than Andalucia's main airport at Malaga, but is closer than Malaga to Granada, Mojacar, the ski resorts of the Sierra Nevada and the unspoilt beaches of Costa Almeria and the eastern towns of Costa Tropical.

Getting to Almeria Airport

Almeria Airport is situated in the south eastern corner of Spain around 9km to the east of Almeria on the coast. The airport is easily accessible by car from the main A7/E15 coastal motorway. Approaching the airport from the east you should take exit 460, or from the west take exit 456.

Car hire companies with offices onsite at Almeria Airport are:-

If you have booked a car or minibus with one of these companies proceed to the rental desks in Arrivals to sign your car rental contract.

There is a Meeting Point to the front of the terminal building where you will be asked to meet the representative from the car rental company if you have not booked with one of the above companies with airport vehicle collection.

Almeria airport has a large rental car park which is 2-minute walk from the terminal building as you exit the airport. This parking area is where rental cars are collected and returned.

The following table summarises car rental companies at Almeria Airport and whether vehicle collection is at the airport or requires a shuttle bus transfer:-

All companies provide basic CDW insurance by law, there will be an insurance excess in the event of vehicle damage or theft. These higher levels of insurance will remove the excess liability but also increase the cost of the rental. If you don't have a credit card (or have low credit on the card) paying for the extra insurance is the most viable option as no credit card security deposit is required.

Normally a valid credit card must be presented when the car is collected.

If you do not have a credit card, you can rent a car with Goldcar, but only if you purchase their additional SuperRelax insurance cover at the desk.

There is a fuel station (ES Alvamar) on the N-347 roundabout at Almeria Airport.

If you hire a car with a Collect Full/Return Full fuel policy ensure that you refuel close to the airport to avoid a possible Administration Fee. Most companies charge around €25 for vehicles which are returned with missing fuel and you may not discover this until you check your credit card bill.

In the departures area is a chemist, a police station and medical area and all the usual duty-free shopping and restaurants. 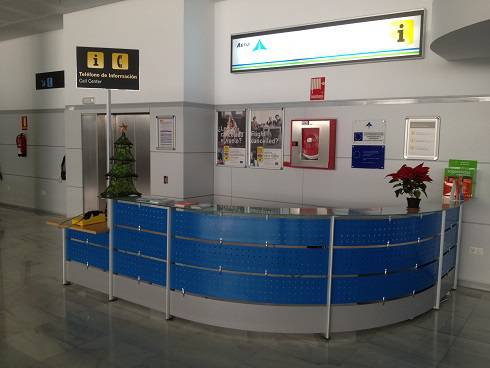 AENA the Spanish authority which runs Almeria Airport have an information desk inside the terminal building. If you are lost or have any questions regarding airport facilities including disabled access, their representatives will speak English and should be able to help.

Free Wi-Fi is provided by the airport operator AENA throughout the terminal building.

There are 3 options for getting to and from the airport - rental car, bus or taxi. There is a regular bus service to Almeria operated by Serbus which takes around 25 minutes to Almeria city centre. A taxi should cost around €15 to Almeria and €25 to Roquetas de Mar.

The following airlines are among those which fly to Almeria Airport (LEI):- 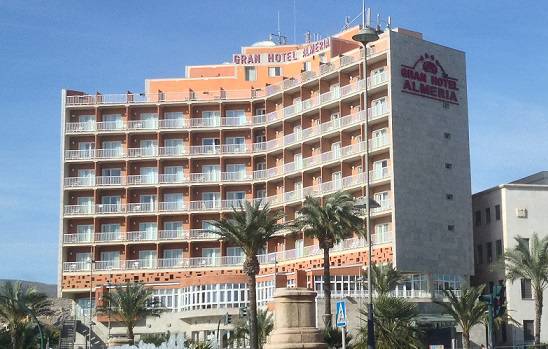 There are no hotels at Almeria Airport, so if you have an early morning or late-night flight, the centre of Almeria (which is around 9kms from the airport) is probably the best option if you require a stopover. Many of the hotels in Almeria have sea (or harbour) views and are very reasonably priced. Hotels in Almeria are generally cheaper than in the neighbouring Costa del Sol, expect to pay €40-80 per night depending on the season and quality of accommodation.

If you want to avoid the busy city of Almeria, around a 20-minute drive to the west of the airport is Roquetas de Mar, a traditional Spanish beach resort with many low-cost hotels and apartments. There are buses to Roquetas from Almeria bus station run by Alsa.

The Almeria region is the most arid area of Spain and combined with the warm temperatures much of the interior of Almeria is desert. The Tabernas Desert in Almeria was the location for the filming of Sergio Leone's Spaghetti Western Trilogy starring Clint Eastwood and scenes from Indiana Jones were also filmed in this rather alien landscape. 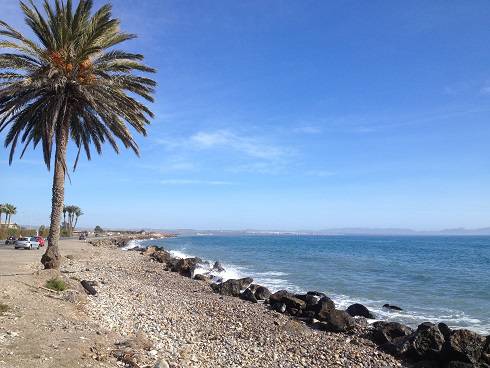 Costa Almeria is far less developed than the Costa del Sol, and much of the coastline is unspoilt, particularly to the east. To the west much of the coastal area is dominated by huge greenhouses growing fruit and vegetables throughout the year. The Cabo de Gata-Nijar Natural Park is Spain's largest area of protected coastline and has some spectacular views and rock formations along the coast.

If you are visiting Costa Almeria in summertime, the heat can be intense, so September to May is perfect for walking, bird-watching, golf and other outside activities.

Around 1 hour's drive to the north west from Almeria is the historic city of Granada home to the stunning Alhambra Palace. The palace can be very busy, particularly in summer, so it is worth booking tickets in advance to avoid queueing in the heat.

If you are travelling as a group of 9 or under Blue Valley Car Hire provide self-drive minibus rental at Almeria Airport.

The Sierra Nevada which surrounds Granada has some of the best ski resorts in southern Spain, and the season runs from late November to late April.